I believe it’s possible for a people, for a society to heal from deep-seated injury & trauma. Some of us live in such a time, now, in need of convalescence.  I experienced such a collective, extraordinary healing ten years ago. 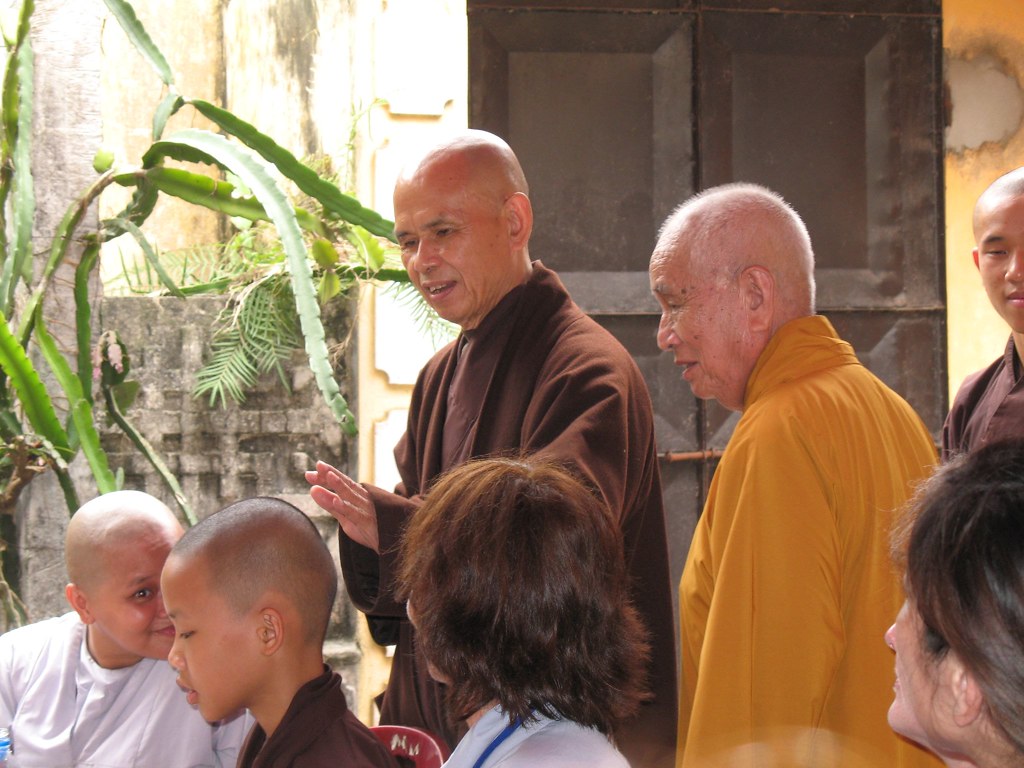 Thay introduces abbot from Dong Dac temple; as Thay came by he told us that many important masters had studied and practiced at this temple.

On this 10 year anniversary of participating for the 3 months on a healing tour to VietNam, accompanying Zen Master Thich Nhat Hanh to his home country, from which he had been exiled from nearly 40 years, I witnessed healing of a country which lost over 6 million citizens to war. There are relatively few men still living over 60 years of age, especially in the north. Words below are re-posted from May 12, 2007, without further comment. 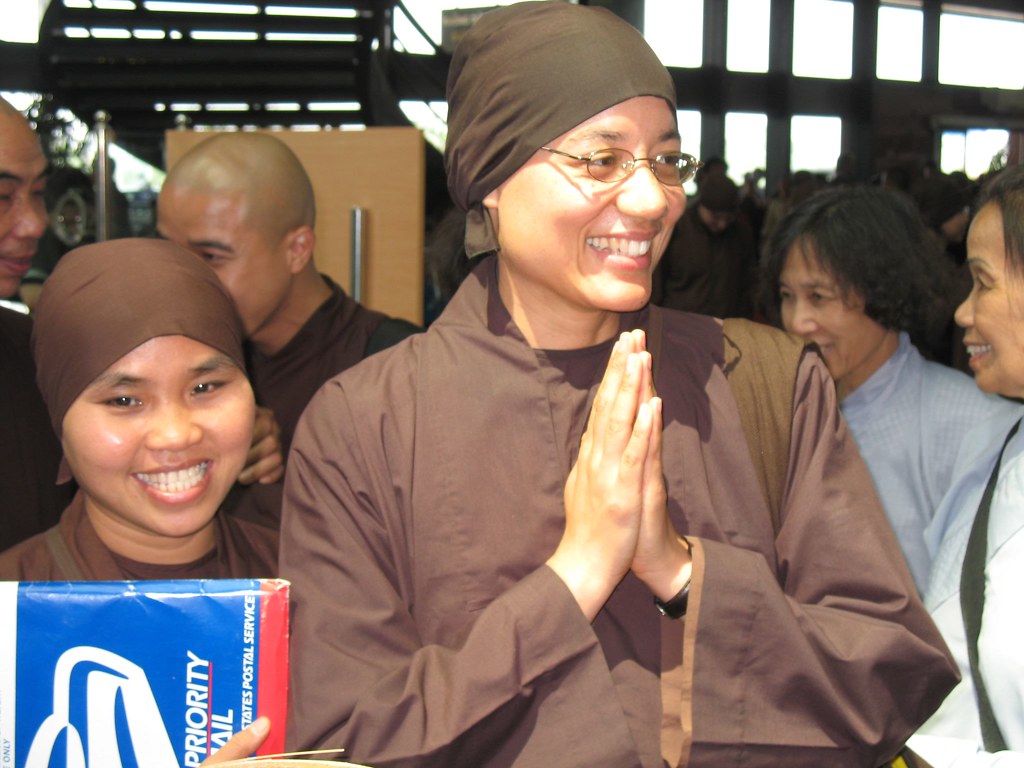 On the way to the Hanoi airport, after nearly 3 months on an amazing pilgrimage which began in Ho Chi Minh City, en route to flying home I read an article in the Vietnam News with the following quote: “President Nguyen Minh Triet hailed high-profile Vietnamese Buddhist monk Thich Nhat Hanh’s visit as a great contribution to Vietnam’s religious activities during their meeting in Hanoi Saturday (May 5th). Triet said he hoped that the “Zen Master” would make more trips to Vietnam and contribute further to national solidarity and development. Hanh has been in Vietnam for a three-month visit since February 20, during which he held three chanting ceremonies, known as Grand Requiems, for those killed in all wars and accidents in the country. Triet told Hanh that Vietnam always respects religious freedom and is determined to make all religions welcomed.” I smiled reading that Thay’s call for the President and/or Prime Minister’s support for the ceremonies to reconcile a nation and other events offered by the sangha had, in part, been realized. 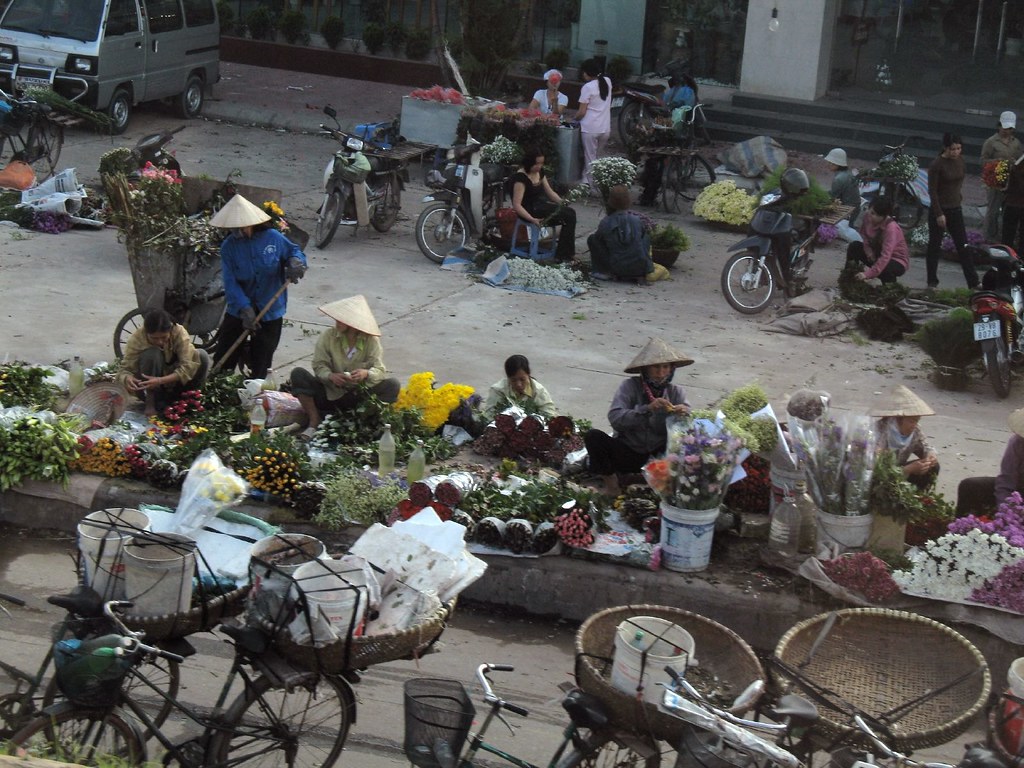 Today sitting in my dirty car, while slowly being hauled through the Bubble Machine Car Wash’s suds, some questions came to my mind. Like, what will be the karma of the pilgrimage? What does it mean to travel across a country supporting the provision of teachings, practices as well as healing ceremonies to affect deep-seated pains of the past, manifesting in the present, in individuals, families, communities and societies? Seeing so, so many people sincerely taste fruits of mindful living practices and find their joy and happiness by using their breath, steps and actions to arrive in the present moment was unforgettable. When might a country who suffers so much, such as America, be ready for such healing, and who would have the credibility and a big enough heart to do it? Despite a lack of awareness published in Vietnam’s government controlled press about the upcoming events or their intention, tens of thousands came out, and countless other Vietnamese and friends of Vietnamese all over the world set up alters and prayed during the ceremonies to remember the victims of the “American and French wars.” Having had witnessed and participated in one of the greatest acts of love towards Vietnamese people, if not all people, animals, plants and minerals, how should I and the hundreds of other western sangha members who gave so much of there time and money to travel together, continue living out our lives, continuing Thay’s intention? Thich Nhat Hanh could conserve his precious energy by staying in Plum Village, occasionally giving talks and continuing sharing his wisdom through writing books. Where does an eighty year old Zen master derive the physical, mental and spiritual energy, boundless bodhichitta (great heart and mind of compassion), to carry out such an epic intention to heal his nation and the world? All of us westerners had moments of shear mental and physical exhaustion keeping up with the schedule. At times it appeared to me that Thay (Vietnamese for “beloved teacher”) had done nothing short of summoning the Buddha within for strength and direction. Upon finishing the car’s wash I wrote these questions down, then started the engine and drove off, bringing full attention to the Southern California drivers zooming around me. 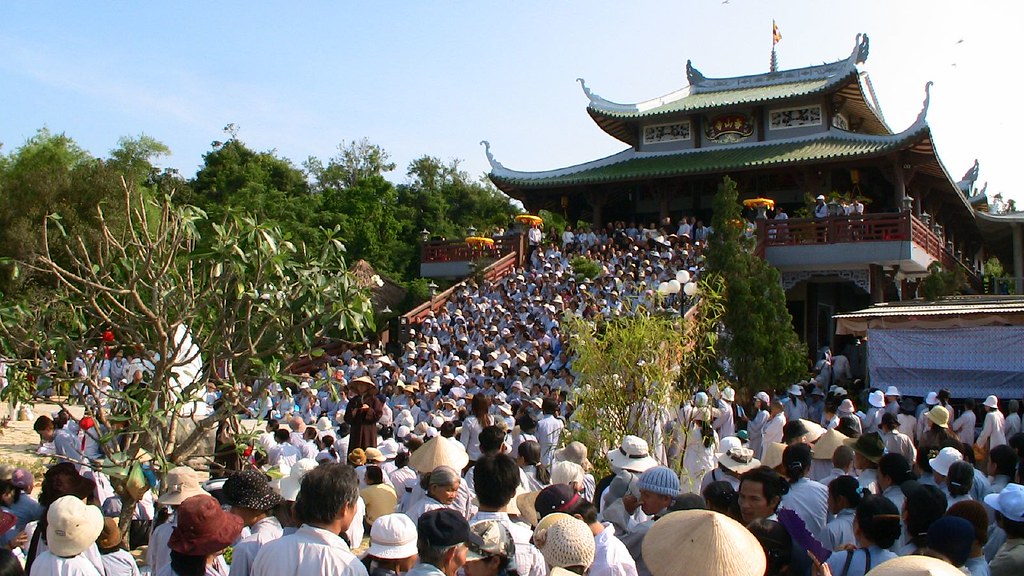 At the final retreats and talks in and near Hanoi Thay continued sharing practical practices from the Lotus sutra, Diamond sutra, and other sutras including the full awareness of breathing, mindfulness and living alone. Attendees at the Vietnam Chamber of Commerce and industry were treated to teachings on deriving insight from our experience, rather than just theories or book learning, and tapping into mindfulness of the breath and awareness of what is going on to find happiness. Negative habit energies of continuing to seek happiness in money, power, fame and sex will most likely lead to more suffering, as is experienced in the West. Buddhism is attractive in the West because it is very scientific in its approach to addressing problems within us and in the environment; being viewed more as a philosophy rather than a devotional religion. Thay made it clear over and over that people and the environment share the same fate and continuing to pollute and destroy nature would be our demise. Thay shared how he has counseled many Western government and business leaders that the way out of our shared predicament is by practicing the mindfulness trainings. During his last public talk in Vietnamese at a retreat in Trung Hau temple, a powerful discourse on the teachings of love was given to the people of Vinh Phuc Province. Love is made of understanding, compassion and wisdom. Relationships and love are not individual matters, as is most often practiced in the west. The happiness of the family and community are also at stake in relationships. Parents and children must use loving speech and deep listening so that they can understand each other for what they truly are, continuations of each other. So often each side is caught in up-side down thinking, or having the wrong perceptions and views. In the East there is a tradition of respect, for parents, for our own bodies. This is practiced by dressing modestly, cooperating, being discreet and couples treating each other as guests, even after being married. Thay said that now many young people are in a state of bewilderment with what they see and hear in their environment, on TV’s and hear in music. Many 14 and 15 year old girls are having sex and getting pregnant, without ever knowing what true love is. Their despair ultimately is transmitted to their children who may well go down the same road. Thay concluded by suggesting that this talk on the 4 immeasurable minds should be given over and over to young people so that their happiness can grow in the knowing that true love is an act of friendship towards oneself and others. After this talk the temple’s Venerable monk told Thay that his community must have accumulated much merit from their ancestors to receive such a powerful teaching, and that he does not know how to repay the generosity and compassion. 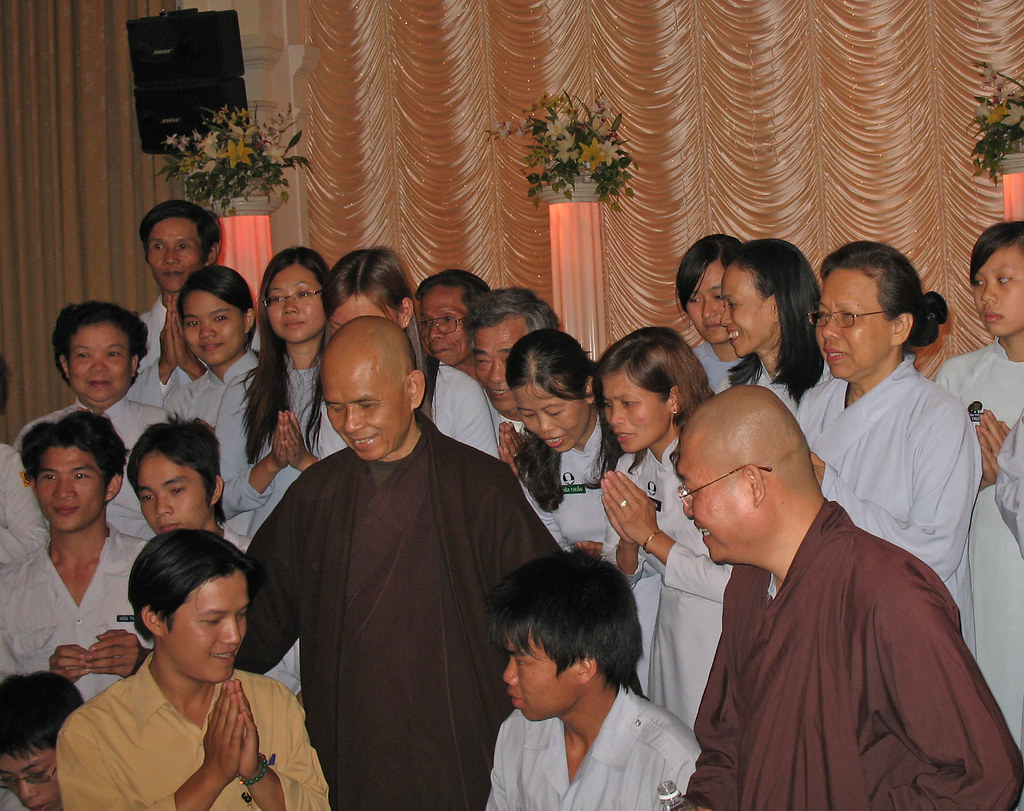 At the end of each of the 4 segments of this 3 month journey across Vietnam, members of the western lay sangha wrote comments of gratitude, observations of the beauty of Vietnam and it’s loving people and personal transformations, in a journal. After the final dharma talk in Hanoi the book was presented to Thay. I’m told he smiled and gratefully commented that he wished that we all could accompany him and the monastics to Hong Kong and Thailand, where they will continue giving talks and retreats until early June. Thay made it clear in his words and actions during the entire trip how our lay presence was helping support the healing. We have benefited from his wisdom of no coming, no going, realizing that we are in him, and he is in us; insight passed on by a great teacher. It’s astonishing to think that later this year he plans to give retreats in Europe and America. May he and the sangha have both good health and fortune in their continued efforts as bodhisattvas. 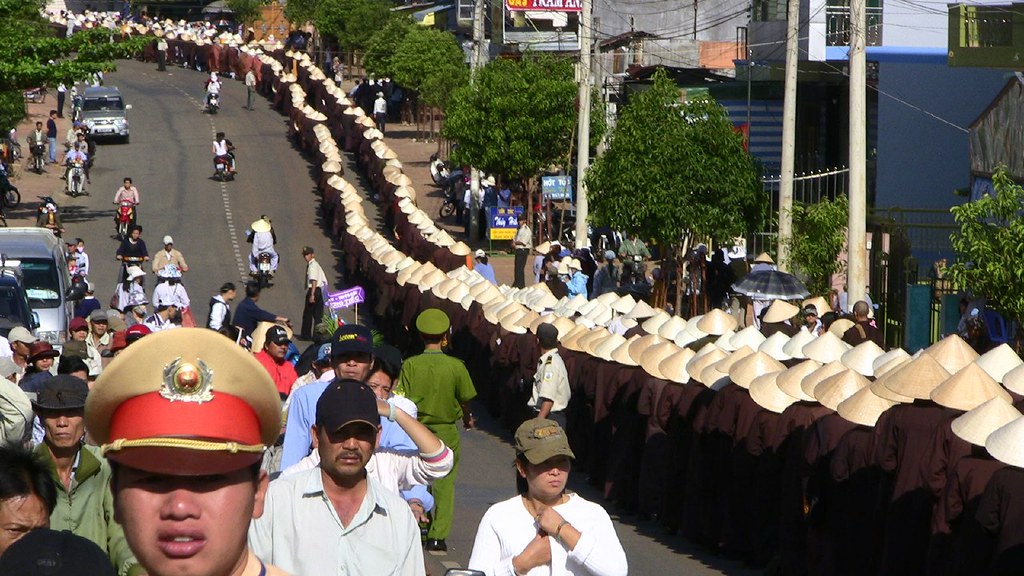 During the next month or so I will produce a video of the pilgrimage so that other sangha members around the world, who were either there or not, can see for themselves glimpses of what happened. You’re welcome to let me know if you’d like a copy. In the mean time there are many pictures and accounts available on the web, including mine at http://www.flickr.com/photos/rezdog . Smiles to you and best wishes in your practice of touching the joy and happiness which is you, already,
david, Compassionate Guidance of the Heart, Truly Holding Equanimity 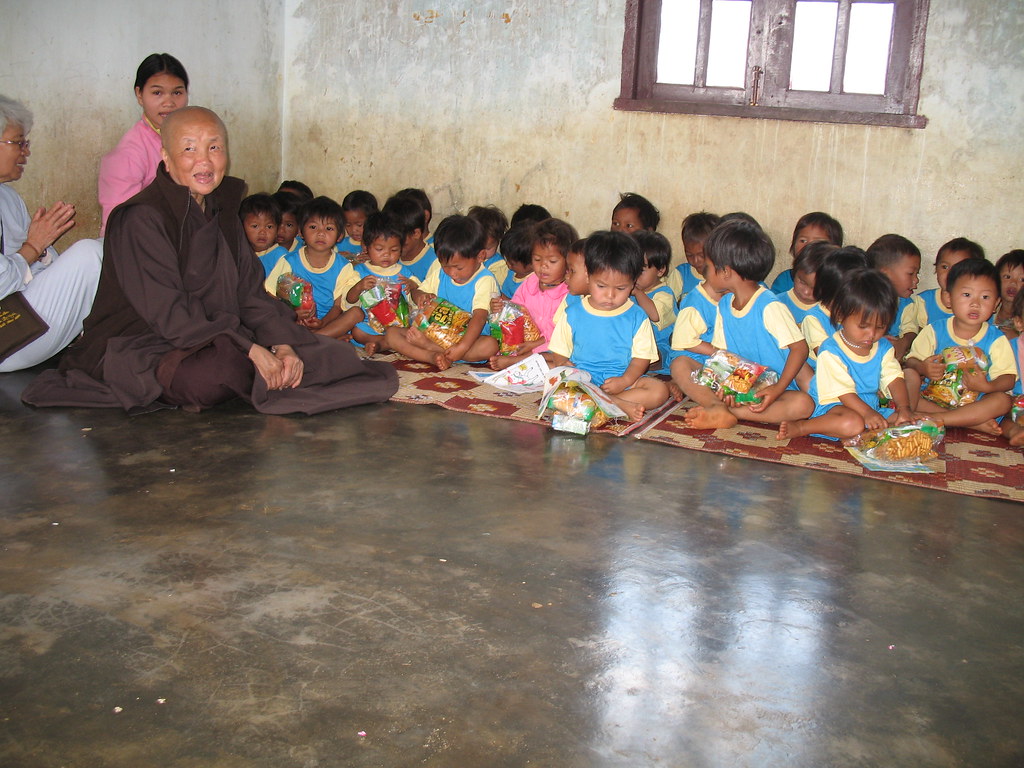 85 Replies to “Happy Continuation: an epi-blog of VietNam ’07”

This site uses Akismet to reduce spam. Learn how your comment data is processed.